Check out these cheap and easy Halloween costume ideas.

Halloween is just a few weeks away, and those who celebrate the holiday are revving up in preparation for a night of tricks and treats and fun.

It’s been a few years since I’ve dressed up for Halloween, but some of my close friends are having a Halloween party, so this year I’m going out and having some fun. Now the task at hand is to come up with a cheap and fun costume for the night (and to try to convince the boyfriend to dress up as well–does anyone have any tips for that?).

I haven’t decided what I want to be yet, but I’ve brainstormed a few ideas on how to put together a fabulous costume for less. Check out the tips: 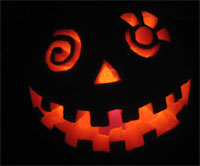 This is probably the cheapest way to go about it. If you’re creative and have a great idea, making your own costume can be a lot of fun and impress all your friends. Plus, you won’t have to worry about running into anybody with the same costume.

If you’re handy with a sewing machine, you can do something completely from scratch or assemble a costume based off a pattern (another pattern site).

Don’t even know how to turn on a sewing machine? That’s okay, there’s plenty of no-sew costume ideas.

If you’re stumped on what you want to be, check out this list of different ideas including couple costumes or simple costumes you may be able to assemble from things in your own closet. Also check out 50 Homemade Costume Ideas.

If you don’t mind getting something second hand, a thrift store is a great place to look. A lot of the stores in my area have set up racks or entire sections just of Halloween costumes. Since it’s a thrift store, the costumes will be considerably cheaper than at a costume shop, but usually of great quality since they were probably only worn once before.

Thrift stores are also a great source of cheap items to make simple but creative costumes. Buying clothing outside of your usual style and you can dress up like a nerd, punk rocker, grandma, etc.

There are countless sources on the internet for cheap, yet awesome costumes.

Previously I’ve bought cheap costumes through eBay. You can find anything there, from new or used costumes to accessories and make-up. Just make sure you order far enough in advance to receive your costume on time and take into consideration the fact that someone might outbid you.

If you’re looking for a new costume, Amazon.com has a ton of costumes and accessories to choose from. This is a great option if you’ve earned a lot of gift cards from survey sites.

Plan Ahead for Next Year

Right after Halloween, all of those leftover costumes in retail stores (and some website) will go on clearance. Snatching up something great to wear for next year now can save you big money next fall.

If you need ideas for some cool costumes, check out these spicy and hot Sriracha Hot Sauce Costumes.

Check out these cheap and easy Halloween costume ideas.