I haven’t written too much about my personal finances on this blog in the past year, and that’s mostly because I’ve spent the majority of the year unemployed, so it’s been very tough.

One of the biggest strains on my finances is the immense amount of student loan debt I amassed before I graduated from college in 2008. I had no idea when I took out the loans to pay for school exactly how much a financial burden it would be, especially since everyone kept saying, “Oh, just take out the loans and then with your degree you’ll get a good job and pay them off.”

Obviously, that has not been the case. The economy sucks, unemployment is high, and I haven’t had a decent paying job since graduation. I spent most of the time since graduation putting my loans in forbearance, so I didn’t have to make payments but the interest kept piling up and adding on to my principal. It was a snowball effect.

By the time I was able to start making payments on my loans in January of this year (thanks to a temporary job), my monthly payment was $1024.43 for my private loans. That’s a lot. In fact it was just a little bit less than I was making each month after taxes. Luckily I don’t have expense many people have like rent or a car, but it’s tough to make those payments every month (even more so now that I’m not working). 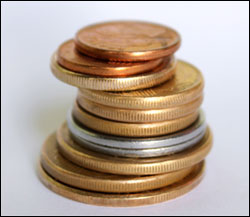 In March, I wrote about ways to help pay off your student loans, and the first tip I mentioned was paying a little extra each month.

But how does a couple of dollars make a difference? Well, I’ll show you, with evidence from my e-bills.

As I said before, my monthly payment was $1024.43 a month when I started making payments in January.

Instead of paying that exact amount I rounded up and paid $1030 a month. That extra $5.57 a month doesn’t seem like a lot, but it made a difference.

So far I’ve saved myself $499.68. That’s a significant chunk of change, and this is only after 7 payments with a little extra. Think of how much more this will snowball when I can pay a little more extra and really start reducing my principal.

My recommendation is that if you’re using this technique and Sallie Mae starts lowering your monthly payments, keep paying the same amount you started out with. You already know how to live on a budget where you’re paying that amount to your student loans, so keep doing it. It will help you pay it down even faster and lower the amount of interest you are paying.

This technique could also be used to pay down other loans or credit card debt.