This week has been a little more exciting in our garden. Last week was mostly just waiting. We’re still waiting, but at least we harvested some this week.

This week’s haul included 2 cucumbers and 6 beans. They were delicious. Also, we use the basil and green onions whenever opportunity arises. We’re still impatiently waiting on those tomatoes, but there’s some good news this week: 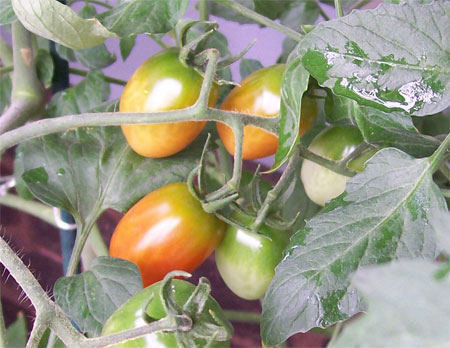 They’re turning orange! I hope we have some yummy cherry tomatoes ready to eat in the near future.

This is even more exciting: I spotted a female flower on the squash plant. 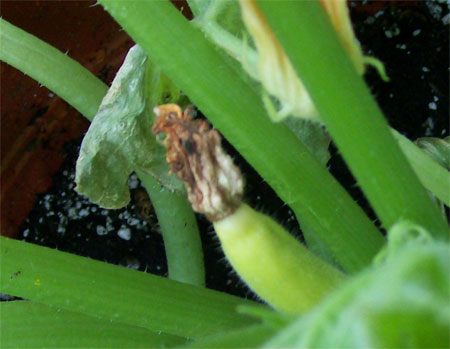 Unfortunately, by the time I saw it, the flower had already closed up. We’re not sure if it was pollinated, so we’re waiting with bated breath to see if it will shrivel up and fall off. I saw more female flowers in the making on both plants, so hopefully there will be squash in our future!

Two of our cucumber plants are getting huge–they’ve outgrown their stakes! 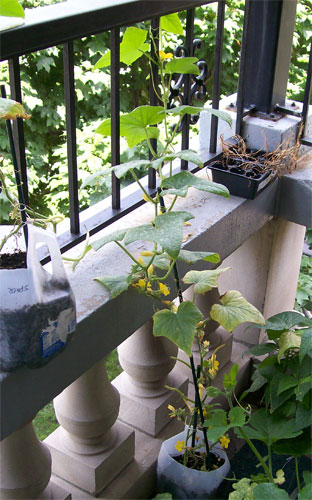 This one is now vining it’s way up the railing. I’m curious to see how much taller they’ll get. There’s more female flowers and baby cucumbers forming on most of the plants. We have a nice one that’s growing long and fast–hopefully our first normal, not misshapen beauty. (I noticed at the farmer’s market this weekend that a bunch of their cucumbers were misshapen as well, so I don’t feel too bad about ours). 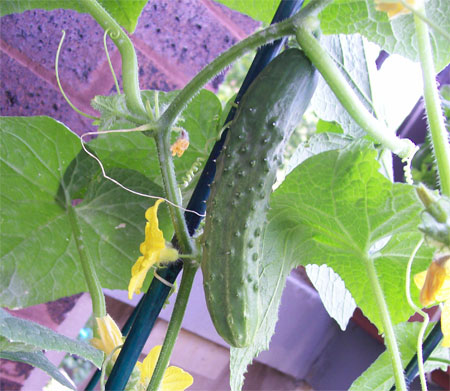 Unfortunately one of our cucumbers is on death watch. 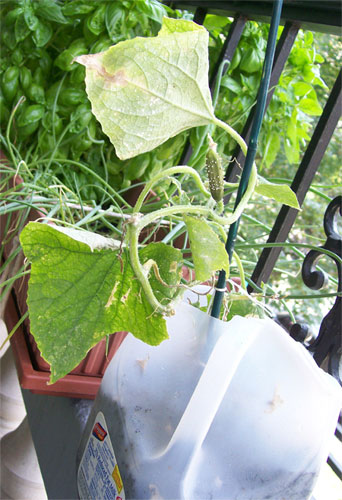 I’m afraid it may succumb to that relentless powdery mildew. It will be our first casualty if it does. I’m keeping an eye on it and hopefully it will pull through.

As far as general gardening goes, I planted a few more lettuce seeds to keep that producing consistently. We’ve also been thinking a lot about what we want to grow next year and gardening supplies we need to buy. As the summer is winding down, a lot of stores are putting their gardening supplies on sale. I was able to pick up a new pair of garden gloves for 69 cents and a nice trowel for 99 cents at Jewel this weekend. We’re keeping our eyes out for clearance sales on seeds (we store them in the refrigerator to make them last longer) and hanging baskets for the patio.

If you want to start container gardening next year or add on to what you’ve already started, this is a great time to go out and find some deals. Check hardware stores, grocery stores, and mass merchandisers like Target and Wal-Mart. All of their seasonal stuff has to go to make room for back to school sales and other fall items, so you’ll probably score some great deals.

Here’s the video for the week, which features a cameo of my rabbit Barney:

For those who are new, this year the boyfriend and I are doing a little container gardening experiment where we are trying to grow various herbs and vegetables on our patio. We live in the city of Chicago, so traditional gardening is out of the question. You can subscribe to the RSS feed to instantly receive the posts each week and also check out our previous posts. Feel free to subscribe to our Youtube channel as well.